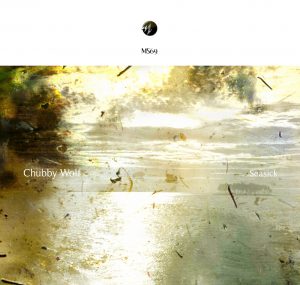 After waiting in production for several years, Mystery Sea has released the work ‘Seasick’ by Chubby Wolf, the solo project of Danielle Baquet-Long. I’m very glad for such a special release to happen for Chubby Wolf on such a great label.

Press release:
A mis-use of mistrust,
a clouted loop,
a taking under.
a view of islands hidden by a cloak of sea steam,
a loss,
a hidrotic tide.
Thus, I sigh at the sea, and
the sea sighed back at me.

– Danielle Baquet-Long
In a very short span of time and of creative obsession, Celer have managed to amass an astounding body of works…but this didn’t help to quench the thirst yet, and Danielle Baquet-Long, half of this symbiotic duo, under her wry moniker Chubby Wolf, sketched her own repertoire of twisted ambient patterns through spontaneous & diligent experimentation – this led to some brilliant discs, as for instance, “L’Histoire” on Gears Of Sand… Here on “Seasick” comes another of her sadly posthumous treasures, and it’s truly a pinnacle…some stirring ode to the immanence of the sea, and the ever shifting horizon strewn with ships going who-knows-where…
An imposing slow unfolding lament respectfully & subtly enhanced by Mathieu Ruhlmann’s mastering who dared to sprinkle Dani’s soundscape with aural debris giving the whole work a new aura & pertinent direction…

After all, Dani is still sailing…

In front of us,
a vertiginous sea,
submerged crevasses
frozen moments of uncertainty
that makes our hearts sink
into this solemn immensity…

And when we get closer,
It’s all ebullience,
an endless wash of disparate elements
pulled from a disintegrated cosmos…

So, we’ll leave this world,
as naked as when we entered into it,
just shot through by its piercing beauty & sly unease,
SEASICK, but somehow reconciled…

On 8 July—the anniversary of Danielle Baquet-Long’s death—in a rather lovely coincidence, her first posthumous release, Ornitheology, landed on my doormat • That was the standard edition, released in a typically short run of 125 copies by Digitalis—by now, of course, very sold out • Yesterday, the special edition arrived, in an even shorter run of just 21 copies, the cassette housed in a black wallet, replete with pink bow fixed to the front, all made from rather-curious-to-hold-but-very-striking-to-behold latex; designed by fashion’s latex goddess Sophie Richardoz, it gives the release an exotic, sensuous & highly tactile quality • Despite their resurgence in recent times, cassette releases have a tendency to appear less substantial than those on other media, in part due to the (usually) shorter durations they occupy • But Ornitheology is a different entity, its brace of tracks amounting to over 90 minutes of music, a demonstrative statement of intent as well as an article of faith in the cassette medium •

For listeners accustomed to the endlessly new & diverse but ever unified output from Celer, it can feel somewhat difficult to extricate Baquet-Long’s parallel Chubby Wolf project • A simplistic view would be to regard it as a solo extension of Celer’s work—after all, her material obviously carries many of the hallmarks of the established Celer sound • But on both her previous releases—the EP Meandering Pupa & album L’Histoire—a notably different sound, i feel, emerges; one that might be described as more focussed & intense, more austere, & certainly more demanding (which is not to suggest Celer’s music lacks these qualities; far from it) • Indeed, both these releases, with their firm sense of patience & restraint, & the resultant cool, aloof textures, are in fact a world away from most Celer, really akin only to their great anomaly, Sieline • Baquet-Long is clearly an independent force to be reckoned with on her own terms •
Ornitheology, however, is the first Chubby Wolf release to acknowledge & assimilate the warmer musical climes inhabited by Celer; it’s fitting, therefore, that the work is dedicated to husband Will • The latter track, “Phantasmagoria Of Nothingness (Prey To Our Emotions)”, is something of a hybrid; the austerity remains in the narrow dynamic range & minimal activity—exhibited most emphatically in the droning pitch (C) that sits in the foreground for much of the track’s duration • However, this note is drenched in a gentle, drifting fog that prevents it from becoming irritatingly persistent, muting it & causing the surface to ripple & undulate • The effect is disconcerting: too warm to be ascetic, too cool to be ecstatic; the music hypnotises, confounding attempts to ‘place’ it, & the more i’ve listened to it, the more i’ve realised one needs to embrace the uncertainty • i’ll admit i was initially not so keen on this track, but it’s slowly (& completely) won me over, in no small part due to its reluctance to do precisely that •

On the other hand, the first track, “On Burnt, Gauzed Wings”, consciously allows in far greater warmth • At first listen, little is that different: narrow dynamics (if anything, narrower than its successor), slow movement, no extremes (high/low frequencies are entirely absent), but there’s an abundance of richness allowed to flourish here that is nothing short of breathtaking • It’s a richness that manifests itself strongest in a powerful shifting tide of harmonies that reverberate out & around like distant musicians slowly improvising in a vast cathedral • But ultimately, hyperbole & metaphors seem rather redundant in the face of music that’s simply as beautiful as this track is; of course, a great deal of the material issued by Dani & Will could be described in that way, but this really is something else • Anyone familiar with Celer’s 2008 album I Love You So Much I Can’t Even Title This (The Light That Never Goes Out Went Out) will know what i mean about intense beauty; “On Burnt, Gauzed Wings” really is as good as that •

Only a few weeks ago, i was lamenting the fact that, having listened to very many 2010 releases, not one of them had struck me as an unblemished 5-star candidate • Finally, that lament is over; except to say, of course, that there was an unavoidable sadness in listening to such a gorgeous album from one no longer with us • But Danielle Baquet-Long’s music ultimately conveys such a deep-seated elation that tears—even tears of joy—evaporate in its wake • This is a rare, marvellous album, one of the best from one of the best •