Celer is very active these days with new releases, all recorded by Will Long, but of course you know it was a duo of Will and his wife Danielle Baquet-Long, who died in 2009. The music on ‘I Love You So Much I Can’t Even Title This’ was recorded when she was alive and is inspired by Samuel Barber’s ‘Adagio for Strings’, known to be one of the saddest pieces of classical music, premiered in 1938 but gaining much popularity. Apparently right before Barber died in 1981 he said, “I wish people would listen to my other compositions.” Celer recorded their album using tape and laptop, title ‘came alluded to a Morrissey song’ (also a no festival of joy kind of guy) and released on CDR back then. The music, according to Discogs, was recorded using ‘field recordings made of choirs and a string quartet, performing the works of Samuel Barber, at the Grace Cathedral in San Francisco,
California, in late 2006’, but all of this is now stretched out further and beyond recognition (I think), but it is of similar emotional depth. This is the music of sadness indeed, and perhaps our mind is steered in that direction, since we know the tragic end of Danielle, but even without that, I would think this is all quite sad music. Each side is about fifteen minutes and performs a fine, utter minimalist flow of drone sounds, which indeed could lifted from string quartet or a choir, but it is all transformed to such an extent that this is no longer to be recognized from the results. Of all of these three new releases this is the one that is the most refined, most ambient music if you will and without much happening. If any of these three doesn’t enforce anything upon the listener it is the music of Celer, and it is something that fills up your space in a great way, either when you play this soft or a bit louder. More interesting, however, than ignorable, I’d say. 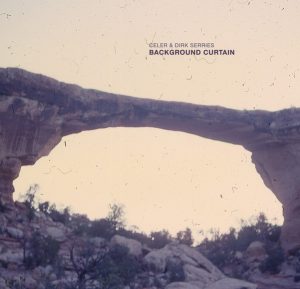 “In 2012, after trading LPs, I sent Dirk a long track of collaged, stretched tape pieces to see if it was something he could work with. This particular set of recordings seemed puzzling to me, and unworkable. Later, after a tour with Mono he actually sent me some tracks that he had made while listening to the piece. Out of the blue, maybe a year later, I went back and listened to our tracks, having some distance for my ears, and had an idea. Using the original track that I sent Dirk at the very beginning as a sound source, I shaped it exactly like Dirk’s responding source file – the musical colour and frequencies were the same, but the effects and enveloping were triggered by the waves of Dirk’s track.

It may be hard to hear the two sides, but it’s really built by the background curtain, and even if you can’t hear it’s place, it’s definitely there. Where does one thing begin and another end? Maybe you can hear it?” – Will Long, 2015

After a number of years listening to Celer’s slow, expansive take on ambient and drone sounds, I would have never expected Will Long to suddenly start making house music.  But he has, in a series of three double 12” singles (and compiled into a double CD compilation), and it only takes a few minutes to realize that it is actually a very good combination.  Even with the addition of drum machines, Long’s knack for creating warm, inviting spaces of electronic music is still vividly on display, and with some assistance from ambient legend Terre Thaemlitz (under the DJ Sprinkles guise), it may be heralding an entirely new direction in his work.

Through my own personal contact with Will Long, I was aware that he had a strong interest in house music and its various permutations for a number of years, and after thinking about it briefly, the amalgamation of the two styles makes perfect sense.  Both are electronic-centric genres that strive to do a lot with very little as far as instrumentation goes, so joining the two is not as bizarre of a thought as it may seem.

In fact, the first few minutes of the opening “Time Has Come” establishes this:  the light electronic drone that defines many Celer releases appears shaped into an organ-like passage that fits the house style, married to intentionally stiff, synthetic Roland drum machine beats.  With samples of Civil Rights era speeches peppered throughout, the mood and sound is as fitting for 2016 as it would have been in 1986, albeit with Long at the command, the pace is more pensive and the mix is more intentionally skeletal.

These elements recur throughout the seven pieces on disc one.  “Get in and Stay in” is more of a beat focused song, first a taut, stiff mass of hi-hat programming, and then a heavy kick leads the way, being more of the primary focus as the Celer-like drifting electronics surround the song in a warm, inviting haze.  The latter half of “Under-Currents” especially embraces the beat, most explicitly via clinically sharp handclaps that cut through the mix wonderfully.

Each song features an overdubbed (not remixed or reworked) version by Terre Thaemlitz, using the DJ Sprinkles moniker that has been used primarily for dance and DJ related performances.  Thaemlitz’s presence is perfectly fitting, being another artist who is well known for first a rich career in electronic ambient music, who then began to implement more in the way of conventional beats and rhythms under a different name.

The distinction between overdubbed and remixed is an important one, because Sprinkles mostly just adds elements to Long’s original recordings and minor production tricks.  For example, “Time Has Come” has a slightly more bass-heavy presence, and the addition of a pulsating synth bassline throughout.  “Daylight and Dark” has some treated hi-hat sounds and additional layers of sequenced synthesizer, and eventually a denser reverb sheen later on.  The most dramatic addition from Sparkles is on “Under-Currents”:  an additional drum loop appears right at first and stays throughout, as more electronics and layering make for a richer, more dance floor oriented performance that is a bit more distinct from Long’s original, but still retains its essential elements.

Even with the addition of beats, Will Long’s music is a bit too subtle and delicate to be fully club ready.  Not that this is a shortcoming by any means, it is exactly what makes the music stand out.  The overdubs by DJ Sprinkles/Terre Thaemlitz maybe push the recordings a bit more towards the dance floor, but the sound is much more intimate and cerebral, making it best enjoyed in quiet, intimate settings, rather than in a loud, thumping context that would obscure the delicate beauty of these works.

‘Two Days and One Night’ in Vital Weekly

In 1984 Will Long’s great uncle, then 80 years old, went to Tunis from his home in New York, stayed one night in the Hotel Amilcar, from where he sent a blank postcard back to his family in Mississippi. The next day he travelled to Hammamet, rented a hotel room, brought swimming trunks, and by the afternoon drowned in the ocean. That’s what Will Long tells us in the information of his new release as Celer. In 2015 Long undertook the same travel, in the same time frame and made the recordings, which he used for the music on this CD. There are quite some field recordings to be noted in this, but also the trademark long sustaining sounds by Celer. iTunes opens up and calls this new age; and yes, sometimes I think Celer plays a bit of new age doodles, especially in a piece like ‘In All Deracinated Things’, which is the most ‘Celer’ like piece here. Yet I wouldn’t call this new age in the way it is presented now. The bits with just field recordings are way too strange for that; these are very silent pieces and have the faintest trace of sound. A piece like ‘Base Haze’ is simply a far away drone and far from the more musical touch we know. In that sense this album is more like a story, a radio drama (without words that is) mixed with the usual ominous drone/ambience of Celer. That makes this yet again an album by Celer that is slightly different from the many that he does – and looking at his bandcamp there is a lot of Celer available (and many that I didn’t hear). I am never sure what is the deciding factor when it comes to releasing music on a physical format or keep it as a download only, but somehow it seems that Will Long knows perfectly what is a bit different and that those should be available on CD or LP. If you are more of casual fan, then I’d say this particular one is one to get, mixing the classic Celer sound with some refined field recordings, wilfully obscure sounds and all of that into a great story/journey. However sad the origins of these are.

‘Two Days and One Night’ in Norman Records

In 1984, Celer’s 80-year-old uncle took a trip to Tunisia, tragically drowning while swimming in the ocean on only the second day of having been there. An awful incident yes, but Celer wanted to retrace his uncles footsteps by visiting the same places he did back then and chronicle the activity through ambient.

And ambient it is, the usual Celer clouds drifting aimlessly by, this time with some definite sun-scorched-ness to them. I’m getting orange and yellow from this. It could easily be mournful or accepting of his uncle’s fate both at once, the chords toeing the line quite nicely between the two. Snatches of a French man speaking can be heard buried under various points, which sort of makes sense as Tunisia is a land once stolen by the French.

It’s nice to hear Celer do music for places worldwide, and I think carrying on this route would promise some interesting twists and turns in his musical journey.