Celer – Vestiges of an Inherent Melancholy 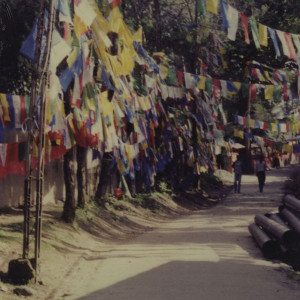 Track list:
Side A
1 Blending Two Beams Of One Eternity / Soon To Waver / Wear At Expectation / Circumvolutions (Maoist Revolution From A Coffee Shop Patio) / A Deadweight, Doleful Dreamstate / All You See Is Red, But All You Feel Is Blue

Release description:
Second vinyl LP from this formerly active American duo of Will Long and Danielle Baquet-Long, which also happens to be the second LP from Celer on Blackest Rainbow. Vestiges Of An Inherent Melancholy follows on from the recent pairing of releases on Basses Frequences and features 2 sides of unearthed recordings that were created between December 2006 and July 2008. These two sides find the duo creating some truly beautiful drone works with their use of an organic and electronic palette of instrumentation; cello, violin, pipe organ, electronics, tape, field recordings, samples, and mixing board. This really is a standout side from Celer, pulling together their variety
of sounds to make a heart breaking collage of sounds falling between beautiful dream tones and heavier dark moments. Vestiges Of An Inherent Melancholy again pushes Celer further to the front of modern minimal compostion, proving that they were one of the most interesting, consistently outstanding, and intriguing acts around in recent years, creating some of the finest and most beautiful, fragile drone records around. The full experience of a Celer release is complete with accompanying titled fragmented sections for the side long pieces, and striking cover photography by Danielle. Limited to 500 copies in thick old style tip-on hardback jackets with LPs pressed on 140 gram virgin vinyl.

Norman Records
Got a coupla newies on the ole Blackest Rainbow label this week and this be one of ’em. A brand new Celer album of previously unheard recordings which were recorded between 2006 and 2008. You kinda know what you’re getting with Celer these days. You either love ’em or hate ’em but to me they’re a benchmark of quality when it comes to ambience as there’s not really many other folks doing it much better. Though they have been known to dark it up like those 2 CD’s they did on Students of Decay which were kinda noisy for Celer. This album sounds lovely. It’s only been on for 5 minutes and I’m into it…. beautiful drones which are both tranquil and warm sounding…. it reminds me a wee bit of Discourses of The Withered which I was only listening to the other night. This one features field recordings from Katmandu (sounds like a busy hectic market or something) and it adds an extra dimension. It’s a very dense sounding record but one I think you’ll love if you’re fan of Celer. Excellent!

Boomkat
Outstanding side of enigmatic ambience from Celer, recorded between december 2006 and july 2008. Added to their usual, almost incapacitating layers of drone and gaseous textures are field recordings made in Kathmandu, Nepal in 2002, providing a visceral, bustling counterpoint to the elegiac sensitivity of their harmonic blurs fashioned from cello, violin, pipe organ and various bits of electronics and post-production enhancements. The compositions are typically austere and minimal yet thick with evocative dream tones and that beautifully fragile feel for inert melody which makes time feel like it’s about to stop. Perhaps the most intangible yet integral element of these recordings is the shifting sense of spaces opening and closing like an undulating topography, articulated especially well in the vivid contrasts between the field recordings and their organically textured tones. Stunningly immersive stuff, pressed on 140gm virgin vinyl and housed in thick, old style tip-on hardback jackets. Limited to 500 copies.

Brainwashed
This unique husband-and-wife duo only existed for a few short years, but during that tragically brief window, they managed to record and release such a staggering avalanche of material that even Masami Akita might raise an eyebrow at their tireless pace.  As such, navigating their sprawling discography of mostly limited edition releases is a daunting and complicated task, particularly since the difference between great minimal drone and not-so-great minimal drone is very blurry and difficult to articulate.  Thankfully, this (one of their rare few vinyl releases) provides an excellent starting point.

The works here were culled from recordings made by Will Long and Dani Baquet-Long over an 18-month period ending in July 2008, about a year before Dani unexpectedly died from heart failure.  Although  presumably absent from the mixing and assembling of the finished album, Baquet-Long’s presence remains quite prominent, as she posthumously provides many of the album’s most vibrant elements through her field recordings from Nepal and her perversely festive cover art.   Also, of course, she is responsible for a lot of the music, though it is nearly impossible to tell which instruments are being played at any given time (or by whom), as the Celer sound is heavily blurred and processed.  Their closest stylistic kin is probably Disintegration Loops-era William Basinski, as both artists have a propensity for repetition, haziness, and slow-motion drifting, but there are some considerable differences as well.

In characteristic Celer fashion, each side of this release is essentially comprised of just one lengthy piece, but given multiple titled sections that are quite difficult to isolate. The music itself is essentially drone in the most “drone” sense possible, as the pair employ their arsenal of pipe organs, strings, and tapes to create a vaporously shifting bed for a host of swelling and shimmering other indistinct sounds to emerge from and disappear back into.  Such an aesthetic has the potential to be a bit on the dull side, but Celer wisely intersperse their narcotic reveries with untreated field recordings of boisterous crowds from Dani’s stay in Kathmandu (as well as a particularly poignant old movie snippet).  The overall effect is like being in an alternately warm and eerily desolate dream, but sometimes drifting back into semi-consciousness to find a somewhat unfamiliar world.  It can be a bit disquieting and sad, but it can also be quite absorbing.

While some of this material was recorded as much as four years ago and has mysteriously avoided being released by a duo that that has historically had no problem in hitting double-digits for releases within a single year, Long has succeeded in shaping the orphaned pieces into a very coherent and satisfying whole.  I am by no means a Celer completist, but Vestiges of an Inherent Melancholy does not fall far short of my current favorite Celer release (2009’s Capri) and offers the added perk of not being out of print (also, the glossy cover art is rather striking too, for people who like pretty things).