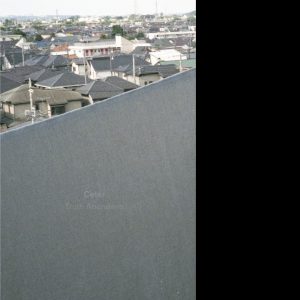 Track list:
Side A
1 1-5 Too Innocent But Within Reach / Wakefulness In The Borderlands / Tips For Subjunctive Hopes / Concave / In The Darkness. And Pointed At Everyone Else
2 6-10 Azure & Midnight / These Times Are Unfriendly Towards Worlds Alternative To This One / The Forebeards Of Forever / Nearest / C Shimmer
3 11-12 The Mnemonick Deep / Tangles Of Lines

Release description:
In June of 2012, I spent several weeks packing to move to a new apartment. Everything was in boxes, and I realized that the majority of my possessions were CDs and vinyl, mostly copies of my own releases. That month, I took many of my own copies of CDs and records to Disk Union, selling them for less than half of wholesale prices, just because I couldn’t get rid of them otherwise, and to lighten the load of moving. I got rid of a few keyboards, including a Korg that I found on the street in Ochiai, I ended up leaving for the electronics garbage man. When something in your life is changing, for a while everything seems like a blur, and like you’re always moving to a new hotel room. You’re going to the same place, but it isn’t home yet. There was a pile of boxes in the corner of the room, an open balcony window, and a laptop on the floor. I watched the movie Overboard several times, just because the DVD was still in my computer, and hadn’t been packed up with everything else. Unpacking slowly, things began to come out, and piece themselves together into functionality again. In boxes of randomness I found some tapes of unused recordings, made sometime in my older apartment, for a show at Forestlimit in Hatagaya a few weeks before, when I used an open cassette player for live modulation. All those recordings came together, and once cut to length, fit as individual pieces of a wider whole. It took several weeks, but the pieces with no place eventually find somewhere, and fit, whether it was the intention or not. Then, most importantly, they have a home.