Celer – The Everything and the Nothing 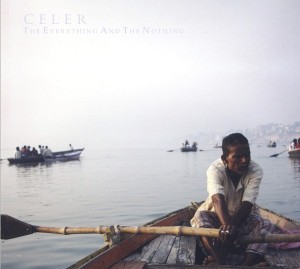 Track list:
1 Illegal Photographs Of The Funeral Fires / In A Pulse / Dancing As Terrorism / Varanasi / Auctorial Days Of Delhi / So Very Sari, I Swear / Chest Mulct / The Sangha Inside / Sweep / The Ananta – Shesha Over The Ganges / New Years In Dharamsala / Leaving A New Home / Shesha (That Which Remains)

Textura
The Everything and the Nothing is subtitled Outtakes and Ephemera from the Discourses of the Withered in 13 Parts but it’s presented as a single, uninterrupted piece of seventy-minute duration. It picks up where its sister release leaves off with heavenly tonal waves and proceeds to weave similarly rapturous material and field recordings into an episodic travelogue. Signaled by the fleeting appearance of voices, the mood shifts twenty minutes in, becoming even more immersive in its reverb-drenched unfurl. A short recorded section of Indian music (voice and tablas) appears halfway through, as does—unusual for Celer—a humungous bass rumble that escalates to such an eardrum-shattering level you’ll need to lower the volume before the speakers blow. The recording then enters a rather sci-fi-flavoured zone where limpid pools of synth tones softly waver, and shortly thereafter pipa playing (by Rob Farley) lends the recording an overtly exotic quality before the tonal waves re-appear to carry the piece to its conclusion.

Norman Records
What a pleasant surprise to get a follow up to ‘Discourses Of The Withered’ on Infraction from happy couple Will and Danielle Baquet-Long duo Celer. ‘The Everything And The Nothing’ is in a sister release to Discourses, being a collection of outtakes and ephemera from the sessions. 13 tracks of pure ambient bliss with silky tones lighting the air then gently retreating until the next wave. The sounds of field recordings and unidentifiable sound sources lurk in the distance among the detailed layers of sound. Gorgeous stuff and a pretty essential partner if you got the first disc. Ltd to 300 copies in digipak with lovely photography from Danielle. How these two lovebirds manage to make such beautiful music together is a mystery to me. If My lady and I tried making tracks together we’d end up scratching each others eyes out…

White_Line
Celer are rapidly emerging as one of a crop of highly talented new ambient artists doing the rounds of worthy and reputable labels. With no finer credentials that the release of their “Mesoscaphe” album on Spekk last year, and more recently their sublimely minimal “Nacreous Clouds” on US label, and/OAR (well worth repeated listening), Celer’s husband and wife team, Will and Dani have come up with another fine release in the form of The Everything and the Nothing, for Infraction. With their usual attention to fine packaging and presentation, this beautiful work homes in on skilfully assembled moody drift-ambient territory as exemplified by the likes of luminaries such as Biosphere, and Seefeel, or possibly Lull. Utilising elegantly cascading whorls of orchestrated sound, looping around a central theme that is sparsely populated, yet utterly hypnotic as it gently unfolds, this 71 minute epic makes several transitions, each transition being separately titled with oblique and enigmatic names such as Dancing as Terrorism, The Sangha Inside, Chest Mulct, or So Very Sari I Swear. Essentially, all of these elements occupy similar sonic territory, with occasional intrusions and deflections to maintain interest, The Everything and The Nothing is a glimpse into the world of the sublime, a cavernous dronescape that maintains a steady discourse with the spiritual and etheric world, shimmering and sparkling with a rich and rare beauty. Absolutely Essential listening.