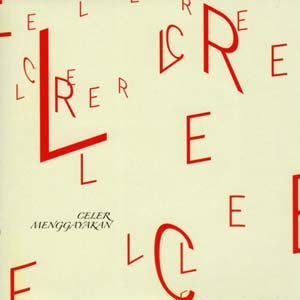 Track list:
1 Hatta / Gliding In The Absolute / Circular Square, Exhaust, Anti-American Protest / A Less Representation Of Myself / Masjid Istiqlal / Breathing Effects, And A Lack Of / Mosquito / Feigned Ignorance And Dissimulation / Ultraclimax / The Romance Of Travel / As Ever

Foxy Digitalis
A truly astonishing work recorded by Will Long in Fall 2010 in Jakarta, Indonesia. This album combines warm, oceanic drone with Indonesian field recordings. Even though track titles are listed, the entire album is a single 51 minute track. There’s no liner notes explaining what the recordings are, but the titles provide some clues; “Circular Square, Exhaust, Anti-American Protest” sounds like helicopters, some shouting and possibly some gunfire. Elsewhere, there appear to be train sounds, crazed laughter, and an advertisement for Singapore Airlines. And the music itself is just absolutely gorgeous and immersive. I’ve only heard a scant few Celer recordings before this one, but I don’t remember those ones being anywhere near as full and rich as these. There’s such a distant, spaced out, yet completely human feel to these drones. The last part, in particular, reminds me of Tomita’s rendition of Debussy’s “Clair De Lune”, which is completely awesome. I can’t recommend this one enough!

Norman Records
Here we have an epic fifty-one minute bliss out from Celer on this limited edition of 150 copies. In many ways it feels like a travelogue created with field recordings, some of which have little to no post production whereas others are more heavily processed and mutate into Celer’s trademark therapeutic multi-faceted drones. Who knows what locations within Jakarta and Indonesia these recordings took place. Remote temples? Busy streets? The lack of explanation from the label only adds to the mysterious quality of the releases and just emphasises the importance of the sounds. I particularly like the recording of a person laughing at around twenty eight minutes which precedes a heavy wall of gaseous ambient sound which gradually floods the soundfield. Recommended.