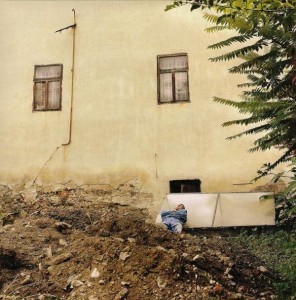 Side B
2 Cantering in a Copper Dress

Release description:
‘Mane Blooms’ is the very first vinyl release by Celer, the husband and wife duo Will Long and Danielle Baquet-Long

Seen by Celer as an ‘outdoor’ companion piece to ‘Brittle’, the duo’s album recently released on Low Point, the music on ‘Mane Blooms’ was created by multiple layers of cello and piano, which were then processed and played back at differing speeds. Also contained within the tracks are field recordings taken whilst Dani rode horses along the Californian coastline, a weekly pursuit that acted as a form of self-therapy and enjoyment.

With the music composed specifically with the vinyl medium in mind, the two sides of the record act as a mirror image. For the B side, Celer approached the music of the first track in reverse, inverting the structure and musical motifs established within the first piece. Altering the playback speed of the vinyl brings previously hidden textures to the fore, providing each of the tracks with a new identity and a different reflection of memory.

Boomkat
A new single-sized outing from Celer, lodged between the release of their marvellous Brittle album and the forthcoming Breeze Of Roses on Dragon’s Eye. This is drone music at its most effortless and enchanting – there seems to be nothing in the Celer catalogue that isn’t – in its own discreet and understated way – approaching a kind of ambient perfection. Designed as an “outdoor” companion piece to Brittle, both tracks here are constituted from multiple layers of piano and cello recital, all woven in with field recordings made during Danielle Baquet-Long’s horse riding trips across the Californian coastline. These sounds were subsequently processed and played back at different speeds, leaving you with something utterly abstract that sounds entirely removed from the source sounds that went into making it. The two pieces both clock in at 5:58, tying in with the band’s notion that they should be mirror images, as if parallel, alternate takes on a single idea. This is such a beautifully formed package that even drone/ambient skeptics might find a way into the genre here. Very highly recommended.

Norman Records
You know when I first clocked this ‘Mane Blooms’ 7” by Celer I must admit that I had my reservations about how suitable their music is/how it would translate to the format. However after a few listens I’ve come to the conclusion that it’s actually really cool. The record serves as a kind of counterpart to the excellent ‘Brittle’ CD recently released by Low-Point, but also as a perfect kind of sampler for anyone that is new to Celer’s music. The two tracks have that distinct Celer flavour that really grabs my soul. The recordings were created with cello, piano and field recordings, all processed to pretty much unrecognizable levels. The attention to detail is wonderful, the tracks are very subtle and once you get in, there is pure warmth and emotion emanating from what on the surface is quite a minimal construction. The beauty lies in the simplicity, the gently evolving tones. It’s magical stuff to say the least. The bonus of the 7” format is that you can play it at either 33rpm or 45rpm for an alternative version of each track. I would say for me this is up there with their finest work and for any Celer fan is pretty much essential. Total class as always from both a consistent artists and label. Another pristine Celer production and the only stuff by them ever to be committed to vinyl, but hopefully not the last… Highly recommended.