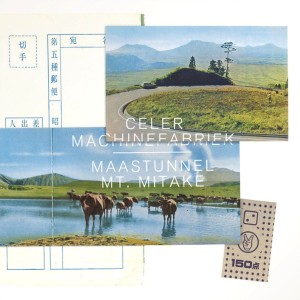 Release description:
According to Discogs, Celer (Will Long) has 76 releases, and Machinefabriek (Rutger Zuydervelt) 99. You can add one to both, ’cause Will and Rutger joined forces to create the 7-inch ‘Maastunnel/Mt. Mitake’. Originally meeting and performing in Tokyo together in November 2010, the two began a collaboration in October 2011 by sending audio files back and forth. By the end of November, two tracks were completed, constructed from hours of material, ‘materializing’ the Tokyo-Rotterdam connection.

The artwork was found by Will Long in a nostalgia shop in Jimbocho, Tokyo, the area famous for its many used bookshops, and the sleeve was designed by Rutger Zuydervelt. ‘Mt. Mitake’ is a mountain to the west of Tokyo, which Will Long climbed on the day between finding the artwork, and finishing the track. The other piece is called ‘Maastunnel’, named after the tunnel that connects the banks of the Nieuwe Maas in Rotterdam. You’ll hear recordings of the tunnel’s old wooden escalators, creating a fascinating symphony of squeaks and howls.

‘Maastunnel/Mt. Mitake’ was created to celebrate the upcoming Celer / Machinefabriek tour of The Netherlands and Belgium in March of 2012.

Boomkat
Rutger Zuydervelt (Machinefabriek) meets Will Long in a charming trans-continental hook-up created to celebrate their upcoming tour of The Netherlands and Belgium. Originally meeting and performing in Tokyo in 2010, they began exchanging files and ideas in October 2011, and had completed hours of material by November, from which these two tracks were sourced. A-side ‘Maastunnel’, named after the tunnel which connects the banks of the Nieuwe Maas, uses field recordings of the tunnel’s old wooden escalators to lend a creaking, ethereal sense of space and place to their warmly symphonic ambient flourishes. Meanwhile the B-side ‘Mt. Mitake’, named after the mountain to the west of Tokyo, is a more placid, spacious piece, reflecting the sunny, blue-skied spirit of the images on the attached postcard, but with a brooding underlying element that should ensure you return to this side again and again.

Wajobu
Maastunnel/Mt. Mitake are readily identifiable places.  Maastunnel is a tunnel in Rotterdam and this track has some mystery.  The piece opens on the outside approach to the tunnel (with the ambient sounds of water).  There is an apparent twist in the plot where voices can be heard, “I didn’t see his face…he might have been just anybody…just anybody.”  Suddenly, a break to the interior where vehicles are passing over expansion joints creating pulses that resonate throughout the underground structure before a quick return to the roadway above-ground.  Mt. Mitake is a contrast to the underworld.  It starts with a sense of floating in the clouds.  The second section creates a sense of tension with the calming effects of the first section in the background; kind of a panoramic view with scenes changing.  The peaceful opening section returns to close the track.

A Closer Listen
When is a single not just a single?  When it’s an event – in this case, the product of two stellar talents, joining forces for the first time.  A shared concert in 2010 inspired these prolific performers to begin exchanging files between Tokyo and Rotterdam, resulting in seven vinyl inches of immersive beauty.  The recording highlights the specific talents of each, while serving as its own unique creation.  On “Maastunnel”, one can hear echoes of Machinefabriek‘s field recording work on The Breathing Bridge: gently withdrawing waves and feathery spindles of traffic, paired with Celer‘s willowed clouds of ambience and embedded static.  The dropout at 2:37 raises the emotional ante with the repetition of the spoken words, “just anybody.”  The bridge sways in the wind; the sonics rise; a lone vehicle speeds off somewhere in the distance.  While it’s irresistible to speculate who did what, it’s enjoyable to remark at how well these two artists have been able to meld their visions.  The beginning of “Mt. Mitake” sounds more like Celer, casting an undulating glow; but by the three and a half minute mark, the timbre seems more reminiscent of Machinefabriek: a building buzz that threatens to overwhelm, but never does.  In the final minute, a three-note chime, offset by a twin contribution, wraps around to the beginning and lends the project a sense of completion.  While listening, it’s easy to imagine one artist contributing the higher-pitched chime and the other the lower. In light of such an impression, the full dialogue sample found on “Maastunnel” seems particularly relevant:  ”What did this man look like?”  ”I didn’t see his face.  He didn’t look up … he might have been just anybody.”  By virtue of their extensive output and expansive careers, either artist could have imposed his sonic stamp on this project, eclipsing the other.  Yet each keeps his head down and enhances the mystery.  A full-length project would be divine, and thanks to an upcoming tour, this wish may soon come true.

Collecting Records
It was just a matter of time before there would be a collaboration between Celer and Machinefabriek, both being among the most productive musicians of this time. Not that Will Long (Celer) and Rutger Zuydervelt (Machinefabriek) actually got together to record Maastunnel / Mt. Mitake, but swapping recordings through the internet with each other is good enough in this case (and eventually they did a tour together in The Netherlands and Belgium so it all worked out well).
For this two tracks both made recordings in the cities they are now living, Long in Tokyo and Zuydervelt in Rotterdam. These recordings got swapped to let both of the work with each others recordings.

In the track Maastunnel we find recordings from Rotterdam (at least I would think so considering the name) which were reworked in such away that we still hear the creaking of the wooden construction in the building, but at the same time there is this very clear trademark of the music by Celer. There are long stretched sounds of which the source isn’t really recognizable any more. It has this feeling of sadness over it that we know so very well by now. But don’t let this hold you back at it is one with beauty. Great ambient music.

On the flipside we find Mt. Mitake which seems to have a wee bit more the Machinefabriek stamp on it. Again we hear stretched sounds, but the sound is a bit sharper with higher pitched sounds. The field-recordings used here are more natural, with sounds from the rain (so it seems), as well as sounds from passing cars. As a whole the piece is a bit more on the heavy side with more bass and the ringing higher tones.

Norman Records
Well, how’s this for a match made in ambient minimal heaven. Messrs Long and Fabriek are collaborating on both sides of this deliciously packaged little 7” with a full colour sleeve and a postcard inside with a download (which includes two videos by Marco Douma) in a hand-numbered edition of 250. You don’t need me to tell you these aren’t gonna be around very long! On the first side there’s a slowly pulsing and therapeutic piece of layered mid-end drones and field recordings that’s best administered horizontally. Flip it and you’ve got something a bit hissier with some glassy high pitched tones underpinned by a repeated two note refrain down at the bottom, intermittent free melodies in the mid, and a constant industrial whirring that slowly builds. This one’s much darker and more imposing than the cleaner and more relaxing A side, but if you’ve made it on here in time to buy one of these babies then you’ll already know that these two are as accomplished as they come when it comes to this kind of meditative tone-building business. And let’s face it, even if you don’t like it there’s always eBay…

A disembodied voice, a tape snippet, inquires, on Maastunnel, the A Side to this auspicious pairing of these two giants of drone. ‘Maastunnel/Mt. Mitake’ came about after Machinefabriek & Celer played a show together in Tokyo in 2010, and was released to coincide with an upcoming European tour, so we will most likely hear more from these combined heads.

Both Machinefabriek & Celer are hyper-prolific, nigh-on legendary in the ambient/drone/field recordings microcosm, so what happens when they get together? That’s why i started with that quote, it is a fine example of the egolessness of both artist’s work, an almost slavish devotion to the ‘sound’, the ‘work’. Tasteful in the extreme, you can hear the individual spirit of each, the squeaky field recordings that are Machinefabriek’s hallmark, the drifting, cloud-like melodies Celer is known for. The overall effect achieved, is a sonic world, an auditory hallucination, with Machinefabriek creating the space for Celer to score, events unfolding, humans interacting with the inanimate.

‘Maastunnel’ is the more pastoral of the two, which is funny as its named after a tunnel, but its tinkling, splashing water give a sense of the outdoors. ‘Mt. Mitake’, named after the mountain to the west of Tokyo, is a more sci-fi affair, think Vangelis, think Klaus Schulze – dreamy, futuristic, floating. The pair make for more colorful drones and inner-visions than the monochromatic blur often found in the more industrial cadre of this style.

‘Maastunnel/Mt. Mitake’ is an exercise in restraint, in good taste. They show respect for one another, the music, and the listener. The whole shebang clocks in at a scant ten-minutes, which means you will spend a lot of time hitting play, or flipping over this little gem. Poring over its intricacies. Makes for pleasant company in the morning, if you want to keep that dreamy vibe going. I’m looking forward to hearing more from these two.

Textura
Some releases are as much art objects as recordings, a perfect example being this beautiful seven-inch affair from Will Long (aka Celer) and Rutger Zuydervelt (aka Machinefabriek), which is worth purchasing on grounds of presentation alone. Long obtained the artwork for the project in a nostalgia shop in Jimbocho, Tokyo, after which, in true collaborative spirit, Zuydervelt designed the sleeve. Adding to the release’s allure, the hand-numbered edition of 250 comes with a download that includes two videos by Marco Douma. How did the release come about? After performing together in Tokyo in November 2010, the two began a long-distance file exchange last fall (between Tokyo and Rotterdam) that drew upon hours of material and resulted in the two tracks issued.

The A-side’s “Maastunnel” (the tunnel that connects the banks of the Nieuwe Maas in Rotterdam) achieves a lovely balance between musical elements and field recordings in augmenting softly whistling waves of shimmering, Celer-like serenity with sounds of water gently lapping ashore, faint traffic noise, and assorted creaks and industrial noise. The result is a masterfully controlled meditation that leaves a strong impression, no matter its brevity. The sense of wonderment carries over to “Mt. Mitake” (a mountain to the west of Tokyo), where glassy tones chime softly and induce a state of calm in the listener. Some degree of turbulence emerges halfway through, however, and the whole thing begins to feel as if it’s being smothered by a dark, suffocating cloud of dust and grime.

Their respective personae are so well established—not counting the collaboration, Discogs lists (at the time of this writing) sixty-nine by Celer and ninety-nine by Machinefabriek—that it comes as a bit of a shock to discover they’d not collaborated prior to this release. Regardless, though the single’s two pieces weigh in at slightly less than ten minutes, they’re an exquisite pair nonetheless, and certainly suggest that some further, more extensive collaboration wouldn’t be unwelcome.