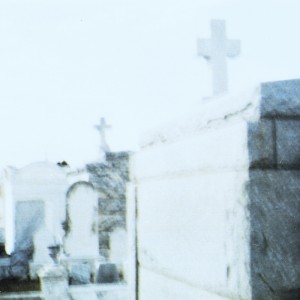 Side A
1 Isotope shortage

Side B
2 Ruined repairs

Side C
3 The delay of intolerance

Side D
4 The delay of intolerance

Release description:
In November of 1938, Samuel Barber’s ‘Adagio for Strings’ was broadcast on radio for the first time. It was regarded as “full of pathos and cathartic passion”, and “perfect in mass and detail”. While it was generally well-received, it was also criticized as “suffering from repetitiousness”, and being “dull and utterly anachronistic.” It is often labeled as ‘the saddest music in the world’, and is one of the most recognizable pieces of popular classical music. In an interview with the New York Times before his death in 1981, Barber said “I wish people would listen to my other compositions.”

‘I love you so much I can’t even title this’, inspired by the music of Samuel Barber, was recorded in 2008, processed on tape and a laptop. The title alluded to a Morrissey song, and she once summed it up by calling it ‘the laziest title I’ve never written’. I remember painting the handmade die-cut sleeves in the garage, having to hold a rag over my nose and mouth to keep out the fumes. At the time, it seemed like an exercise. Studying poetry had distanced us from the world – and did we think anyone was even paying attention, anyway? The theme was overwhelmingly obvious, and the title was direct. A few years later I chose a photo for the cover of a cemetery in New Orleans – another direct message, yet like everything else, entirely unintentional. You’d be surprised how beautiful the cemetery was that day in the sun, and how you’d probably be wrong about every other assumption, as well. But then, what does that matter, either? Music only has to be.

Originally self-released in 2008 as ‘I love you so much I can’t even title this (The light that never goes out went out)’ on CDR in a handmade, limited edition.

‘I love you so much I can’t even title this’ is available on 2xLP on sky blue, white, and black vinyl from Infraction, remastered by Taylor Deupree.

Vital Weekly
Celer is very active these days with new releases, all recorded by Will Long, but of course you know it was a duo of Will and his wife Danielle Baquet-Long, who died in 2009. The music on ‘I Love You So Much I Can’t Even Title This’ was recorded when she was alive and is inspired by Samuel Barber’s ‘Adagio for Strings’, known to be one of the saddest pieces of classical music, premiered in 1938 but gaining much popularity. Apparently right before Barber died in 1981 he said, “I wish people would listen to my other compositions.” Celer recorded their album using tape and laptop, title ‘came alluded to a Morrissey song’ (also a no festival of joy kind of guy) and released on CDR back then. The music, according to Discogs, was recorded using ‘field recordings made of choirs and a string quartet, performing the works of Samuel Barber, at the Grace Cathedral in San Francisco, California, in late 2006’, but all of this is now stretched out further and beyond recognition (I think), but it is of similar emotional depth. This is the music of sadness indeed, and perhaps our mind is steered in that direction, since we know the tragic end of Danielle, but even without that, I would think this is all quite sad music. Each side is about fifteen minutes and performs a fine, utter minimalist flow of drone sounds, which indeed could lifted from string quartet or a choir, but it is all transformed to such an extent that this is no longer to be recognized from the results. Of all of these three new releases this is the one that is the most refined, most ambient music if you will and without much happening. If any of these three doesn’t enforce anything upon the listener it is the music of Celer, and it is something that fills up your space in a great way, either when you play this soft or a bit louder. More interesting, however, than ignorable, I’d say.