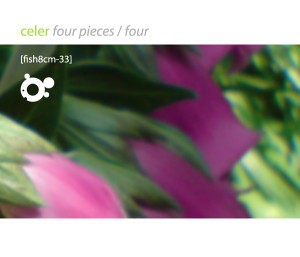 Release description:
As we reach the fourth and final part of the much talked about Four Pieces series I find myself at something of a loss for words. I know for a fact that everyone has their own favourite so far and I’ve always had a tremendous soft spot for ‘Tilleul’.

There’s something classical about it that I can’t quite put my finger one – maybe it’s the very slight discordance that lies in the background, or maybe it’s just the structure itself that lends itself to that comparison, I don’t know. What I do know is that this really is just as deep and beautiful as you’d expect and has a magical sense of flow to it. Contemporary ambience comes in many shapes and forms but Celer really do have a unique and instantly identifiable style and way of putting together compositions. There’s a calming and serene tone to this that’s balanced by a slightly darker lilt that gives it an edge. In fact I think it sits neatly between ‘Photophores’ and ‘Balsam’ sound-wise and in the same way that the first two releases seemed to flow into each other, I really get that sense here as well. Although all these pieces were written in different months in 2007 they seem to share a common theme and feeling and this is why I believe they work so well as a series.

So put it on, sit back and for 20 minutes allow yourself to be enveloped by the frankly incredible sounds of Celer once again. I can’t overstate it enough when I say it really has been an honour and a privilege to be involved with this series and, as much as I have a bitter-sweet feeling about reaching the final instalment, I’m so glad to have had this opportunity. This is music to be treasured and cherished. And you know what? I absolutely know it will be.