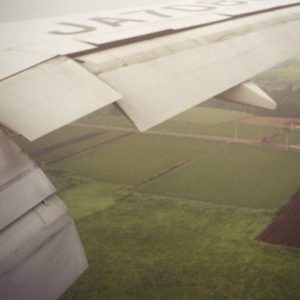 Fluid Radio
Scols is Celer’s sophomore. Originally released in 2006, and presented along with Sunlir as a limited edition 2 x CDR, Scols is a slow-burner, a forever-looping ambient/drone LP in which sustained tones drift, surge, and recede, and the music becomes soporific in its actions and swaying movements. It has aged remarkably well, and the recording has been left with its birthmarks intact, as some skips, clipping, noises, and other artefacts are preserved from the original recordings.

Continents came right after Scols. Both albums have now been remastered by Stephan Mathieu, and they shine a light on Celer’s music as it was still developing, and as a younger artist. And yet, listening back and being very much aware of his output to date, it’s clear that a special form of ambient was already blooming. Although remarkably prolific, there’s a steadying, consistent quality to Will Long’s specific blend of atmospheric, delicate ambient. Like a well-diluted drink, Celer’s music is lighter than most…thinner, one might say…which is down, in part, to his life in Japan, the Japanese lifestyle, and the nation’s specific style of ambient music, but lightness doesn’t equal a lack of depth, and his music goes deeper than most.

In 2020, Scols and Continents are still mesmeric, and they both offered more than a glimpse of what was to come. With the benefit of hindsight, and looking back on his extensive and impressive discography, it’s good to return and revisit the original foundation, to tread once again through the drones, cutting through the atmosphere, and to see the development of a young trail. Tonally, a beautiful continuity runs throughout Long’s work, a tonal tributary which has never run dry, veered off course, or outstayed its welcome. In fact, his music continues to remain fresh.

The ebb and flow of ‘Archival footage of only the lost and forgotten’ carries over to the rest of his work, and the ambient textures have something of a spectral quality, all wispy contours and transient vapours, a film noir scene from early Hollywood, but repeated over and over again as a heavy, slow-burning loop. Celer’s music is raw and young. At this stage, he was still developing his sound (when does an artist stop developing their sound? Does it ever stop?), and this, along with a stellar remastering, is what gifts the music a renewal of energy, and a fresh feel in spite of the 2006 conception.

Sometimes, it’s good to go back.

Headphone Commute
So this past week I have befallen ill. I’ve got the cough, the chills, the fever – all of that fun stuff. I spent a week in bed. Well, not literally in bed – a bit in front of my computer, but mostly on the couch, watching Mubi and drifting off to Celer. As you can imagine, I’m not exactly in the mood for anything too rambunctious [there is a loud word for you!], and yet the music of Will Long is just as luxurious, exuberant, and full of the resplendent sound as my mind now desires. To be fair, it’s been so long without Danielle Baquet, that I have almost gotten used to crediting the work of Celer to Will Long alone. And yet, Continents is a remaster of the original self-released album from 2006, one of the first CDrs by then, and thus, on here, Celer is a duo. This is that early authentic sound that I fell in love with. The stretched and time-warped strings, the endlessly reverbed and delayed keys fused into sonics, unknown textures always threading into each other until they weave a quilt of warmth and space – a cradle for your mind. To appreciate the magic of Celer is to understand the sound itself and to allow it to repeat until you hear something new in resonance, in timbre, and in silence. Absorbing this euphonious medication enables me to float, rest, and heal, while all of the frequencies caress my body. Released for the first time on a CD, the album is offered with artwork featuring the photography of Danielle Baquet, packaged in a 6-panel 2xCD eco-pack. The repress includes two extra tracks not available on previous editions. While you’re there, you should also grab Celer’s Scols, which was also re-released, and just like Continents, remastered by Stephan Mathieu.