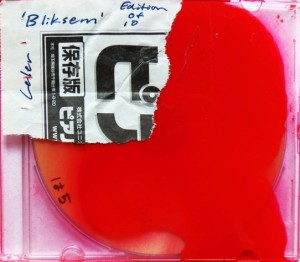 Release description:
‘Bliksem’ was created specifically as a special tour CDR for the March tour of the Netherlands and Belgium with Machinefabriek, in a limited edition of 10 copies. The title ‘Bliksem’ is the Dutch word for ‘lightning’. It was chosen because the piece was made by loop and electronics improvisation the night before flying to the Netherlands. The paint wasn’t even completely dry on the CDRs when I arrived.

A Closer Listen
Talk about limited editions.  Only ten copies of Bliksem (the Dutch word for lightning) were made, and they were distributed on Celer‘s recent tour with Machinefabriek.  If I’d been in the Netherlands at the time, I’d have wanted one; it’s a great event-appropriate souvenir, recorded at midnight on the eve of Will Long’s flight.  As such, it reflects longing, excitement, hope, and a hint of the unknown: the quiet questions inspired by international travel.  Will the tour go well?  Will I make friends?  Will the music be effective?