That Akagi, Will Long’s latest Celer recording, is eighty minutes in duration is probably attributable to the time restriction of the CD format; given its becalmed ambient character, Akagi more suggests the kind of music that under other conditions would continue indefinitely, perpetually regenerating itself within some loft gallery space or meditation center for weeks, even months at a time.

In late 2012, Long was asked to create the material for a live yoga event conducted at Yougenji temple in Northern Tokyo, the idea being that the musician would be positioned behind the audience so as not to distract the attention of the participants away from the yoga instructor. With that in mind, Long generated the music using two reel-to-reel tape machines and two keyboard tape loops with similar time structures but different overlapping chords. In classic ambient fashion, the material changes in only the most subliminal of ways during its presentation, with subtle adjustments in volume the primary alteration that occurs.

Akagi generally hews to the level of a whisper from start to finish, and its gentle, unhurried drift gives it a dream-like quality that encourages a meditative response in the listener. Music of such delicate character also can’t help but engender a state of wistfulness, and as the minutes pass and the body and mind relaxes, thoughts drift to moments long past, and Long’s music begins to take on the memory-awakening character of a Proustian madelaine. For Long himself, Akagi calls to mind moments spent during childhood with his grandmother, who died when he was eleven and spent her last bed-ridden years watching television with her grandson and watching the lace curtains on the windows gently swaying in the afternoon breeze. A clear parallel can be drawn between the time-slowing experience of her final days and the somnolence of Long’s fragile creation.

There was a time when Celer recordings appeared so frequently it was hard to keep track of them; the project’s output has slowed in recent years, perhaps because of Long’s involvement in other projects—his collaborations with Miko under the name Oh, Yoko and with Christoph Heemann as Hollywood Dream Trip, for example—or perhaps it’s because his one-time Celer partner Danielle Baquet is no longer with us. Regardless, Akagi, issued on Long’s own Two Acorns label, makes for a seamless addition to the Celer discography.

Your present reviewer knows next to nothing about yoga, other than it is a wide range of techniques aimed at control of the body and the mind, which evolved over centuries out of Hindu, Buddhist and Janist holy texts. There are as many branches hanging from the willow tree.

Agaki  was created by Celer (Will Long) for an event that took place at the Yougenji temple in Tokyo in the autumn of 2012. Long played to the backs of the yogas and yoginis, overlapping the chords of his twin set of tape machines spooling two keyboard loops. “While changing,” he says, “it maintained the same sound and makeup throughout.” What sticks fast in his memory of the work is the phenomenon of “ever-present surroundings never changing.”

Floating like the wisp of smoke coming off a stick of incense, Agaki curls and intertwines at the behest of small changes in the air. Longing to fill the entire capacity of the compact disc at 79:44, certain classic Eno ambiences of your own preference— Thursday Afternoon or Lightness, perhaps—will come to mind, it would be impossible otherwise. As throughout its long career, Celer proves that a work of art expresses reality in its own nature. 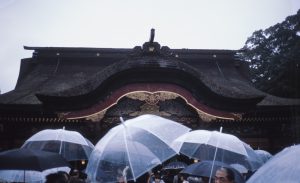 In 2014 I went to Kyushu in Japan for two shows. One of them was in Fukuoka, organized by Duenn, the artist who also runs the label of the same name. The A side (Celer) is two tape pieces, and the B side is by Duenn.

Released on cassette in a limited edition.