‘Without Retrospect, the Morning’ 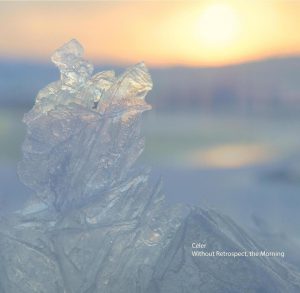 In the winter of 2009, I spent two months living and working a short-term job in photography and surveying in South Alberta, Canada. Aside from the job, it gave me the opportunity to work further on Without Retrospect, the Morning, the final part of the water-themed trilogy of albums that included the previous releases Cursory Asperses and In Escaping Lakes. Some days the snow would be so heavy the sun would never show, and ice covered the windows in the mornings. The wind rushed up the banks of the nearby mountains, and whipped against the buildings.

I had brought with me two Sony Tapecorder open reels, and a box of tapes of recordings from the past six months of piano and synthesizer. Using an endless delay system between the two open reels, I listened, layered, cut and pasted the tapes over time. Playing them out loud on the built-in speakers Tapecorder created a new type of texture, from combinations of the ice cold temperatures heated only by the room gas heater, reused tapes, and the decayed quality of the old speakers. After mixing and processing the tapes with microphone and contact microphone recordings of the ice, snow, and sub frequencies of the wind, the cracking and crunching sounds, both high and deep, seemed to appear naturally in the tape. The sub bass widened, and the mid range became thin and fragile.

For more than two years the recordings remained untouched, until recently, now in Tokyo, they were mastered, and recorded to new tapes. The affects of the cold, the sudden sunsets through the snow, and the night winds still stay in my mind, like a soundtrack to those two months, not without their own songs of loneliness but with also beauty, sounds seeming like a siren, embracing every unchangeable and otherwise forgetful moment, even in the bitter winter. CD edition of 300.