‘A Couple of Swells’ 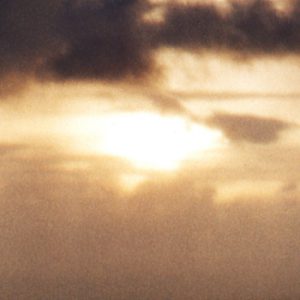 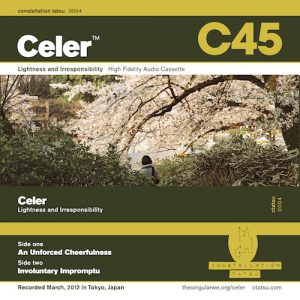 Out now on Constellation Tatsu!

Coming in October on Streamline: ‘I, Anatomy’ 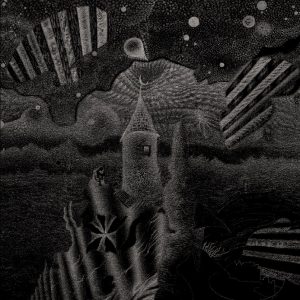 Evaporate and Wonder is the latest ripple in a steady Celer stream whose flow continues with the same reassuring regularity notwithstanding Dani’s departure several years ago. Will Long soldiers on manfully, wil(l)fully, if you will, maintaining their signature glacial-warm form of electronically-enhanced holy minimalism. It’s in particularly good voice here, and substantially less reticent than on certain more parsimonious recent works (cf. Dying Star). Though source material for the recordings is similarly limited—to improvised synthesizers and field recordings in this case, end results are gratifyingly less mean, more moody and magnificent, uncompromised by eponymous evaporative habit—indeed, wonders of diaphanous expansivity. The first of two long-form pieces, “Bedded in Shallow Blades,” is a glassine flow of radical etherealism within which low-end seep creeps through under a nebula of serpentine sonorities simultaneously solid, liquid and gas. A sound so close yet far away, as if a capture of echoes of something that once was straining towards release—towards an elusive eternal perhaps. This orientation is further evidenced on “Repertoire of Dinless Shifts,” on which silvery shoals of minnow-y timbres are maneuvered through a nocturnal hum of sublimated thrum. What ensues is a minimally orchestrated sequence of long drawn out languorous exhales of harmonically coloured haze, eschewing earth and fire for aether and air. Solicitous interventions in processing and composition issue in a fabric of a certain density that nevertheless retains an openness of texture, a supple body and lightness of cadence. Evaporate and Wonder is among the last works Celer recorded as a duo, and here their forces converge with particularly delicate precision in a numinous diptych washed in shades luminous and opaque, static yet shifting, barely there yet fully present, at once everywhere and nowhere.

Celer’s Last.fm profile begins with devastating forthrightness: “Celer was formed in 2005 by Danielle Marie Baquet and William Thomas Long. From 2005 to 2009, Celer was the duo of Will Long and Danielle Baquet-Long. From 2009 to the present, Celer is the solo ambient project of Will Long.” Yet fans concerned about the viability of future Celer output need not have worried; if anything, Will Long (who now lives in Tokyo) has released *more* music since Baquet-Long’s untimely passing. 2012 has been an especially fruitful year for the project, and while Long hasn’t much changed Celer’s classically pure drones, each of his various new albums offers a subtly different take on solitude, silence, and memory made manifest through achingly gorgeous slow-form ambient music. Indeed, Long is the rare recording artist who offers both quality and quantity in equal measure.

Recumbent in Wishes is a self released single track of  coagulating organ meditations on the inevitability of mortality. Layers of sustained notes and chords drift through the listener’s head space like strands of cloudy vapor in a thick early-morning fog. Long himself describes the impetus for the piece: “We all know that there is an end to life, and that sometimes it comes unexpectedly. Though, we always imagine it in the most heroic senses, thinking that we’ll fight through as hard as possible to the bitter end. However, sometimes when that time comes, no matter how strong was the will and heart of the person, something can be lost, and never found again. It’s a sad reality, but nonetheless a true moment of dying.” A veritable vacuum of solace and melancholy, Recumbent in Wishes is probably Celer’s strongest release of the year thus far, hearkening back to famously placid works like Eno’s Thursday Afternoon while imbuing its tones with the kind of spiritual longing in which Celer has long specialized.

Bliksem was originally a tour-only CD-R; fortunately for us, however, Long decided to make it available as a digital download as well. This one’s more cinematic and sweeping than Recumbent, trading the latter’s wispy organ drones for more dramatic synth strings and loops. The result is essentially widescreen Celer that wear its heart on it jumbo-sized sleeve yet never overwhelms the listener with pathos or volume. Like most Celer releases, Bliksem is meant to be absorbed more than studied. Like a scented candle, it’s meant to be passively appreciated as a kind of ambiance as opposed to the subject of a concerted listening effort. For fans of last year’s underrated Foolish Causes of Fail and Ruin.

Tightrope is an aural scrapbook released on UK-based ambient label Low Point that’s sourced from a 2010 performance at a Japanese temple in addition to “television, synthesizers, fire crackling in the fireplace, whistling, pipe organ, eating ice, acoustic guitar, laptop, an afternoon conversation, a medicine drip buzzer, car noise, my ringtone, contact mic and many others I can’t remember” from the same trip. So this is what a Celer field recording sounds like: smeared, stretched, gaseous, fragile. In other words, exactly what you’d probably expect, but beautiful just the same.

Lightness and Irresponsibility is another soft-as-fresh-snow two-track drone album, this time released on cassette by Californian label Constellation Tatsu. If Recumbent in Wishes recalls Thursday Afternoon, then Lightness and Irresponsibility, with its glassy keys and echoing atmospherics, recalls another of Eno’s masterworks, Neroli. This album negotiates with silence and empty space in fascinating (and, of course, slowly evolving) ways. Like a minimalist painting on an oversized canvas, this album’s impact depends as much on what the listener doesn’t hear as on what he does. Though it’s undoubtedly musical, Lightness seems like the shadow or aftermath of some melodic, droning landscape, or like the faint remaining outline of some body in motion recently departed.

Finally, we’d be remiss to not mention Celer’s brief but excellent 7″  with fellow ambient auteur Machinefabriek (aka Rutger Zuydervelt from The Netherlands). “Maastunnel” is an audio collage that’s much crisper and clearer than Tightrope, with fragments of dialogue punctuating the distant drones and backmasked instrumentals. B-side “Mt. Mitake,” meanwhile, is just as monolithic as its name implies, employing static-drenched chunks of sound not unlike the work of Tim Hecker. This record proves that Will Long is still a master collaborator, willing and able to put his signature touches on other artists’ strengths; in addition, it represents an expansion of aural scope for the Celer project, hopefully pointing the way towards future releases that continue to explore the in-between spaces between the material and the ethereal.